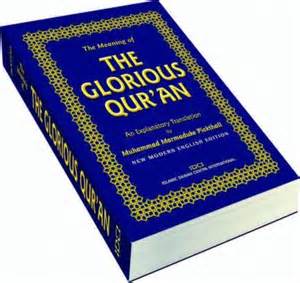 And We have indeed made the Qur’an easy to understand and remember, then is there any that will remember (or receive admonition)?  ( Chapter No 54, Verse No 22 – Holy Quran )

Holy Quran is the most widely read book in the world. The Quran was repeatedly revealed to Prophet Muhammad (PBUH)  through Angel Jibril(AS) who is the king of all Angels.

Holy Quran was revealed at once to Bait ul Aizzah in the month of Ramazan. After then it was revealed on earth towards Prophet Muhammad(PBUH) in different time periods according to the situation and this revelation process lasted for approximately twenty-three  years.

The revelation of  Quran started when Prophet Muhammad(PBUH) was 40 years old and it ends when his age was approximately 63 years.

The Holy Quran was collected by Prophet Muhammad(PBUH) companions and is written and memorized to pass it to the next generations. It was revealed part by part, ayet by ayet and occasionally as whole chapters. It is the most memorable book and is fully memorized by millions of people all over the world.

The companions of Prophet Muhammad(PBUH) served in transferring the Islamic holy book to future generations. The Quran was compiled into a book in the time of the first caliph, Abu Bakr(RA).

During the 23 years of Muhammad’s(PBUH) time as a prophet, the verses of the Quran were memorized as they were revealed, and about 42 scribes wrote the verses on different materials such as paper, cloth, bone fragments and leather.

The delegation of 12 people, including famous figures such as Uthman ibn Affan(RA), Ali ibn Abi Talib(RA), Talha ibn Ubaydullah(RA), Abdullah ibn Masood(RA), Ubayy ibn Kab(RA), Khalid ibn al-Walid(RA), and Hudhaifah(RA) , came together in Umar’s(RA) house and collected all the materials on which verses from the Quran were written.

Holy Quran is the finest piece of literature available in the world in Arabic language. It is the only book in the world that is in its original form after its revelation 1400 years ago.

The first chapter of the Quran is repeated in daily prayers and in other occasions. This chapter, which consists of seven verses, is the most often recited chapter of the Holy Quran:

“All praise belongs to God, Lord of the Universe, the Beneficent, the Merciful and Master of the Day of Judgment, You alone We do worship and from You alone we do seek assistance, guide us to the right path, the path of those to whom You have granted blessings, those who are neither subject to Your anger nor have gone astray.”

Quran Majeed has lot of names , among all 6 are most popular.

Quran Majeed discusses all those points which are necessary for success of human beings in this life and hereafter. Some of the topics discussed by Allah(SWT)  in Quran are as follows:

Everybody must read it and act it accordingly because no one can know the correct path better than the Creator himself .  Every chapter begins with the name of Allah except one chapter.

Holy Quran also contains historic events information that appeared in past so that people can learn from it. It also contains information and life of some of the previous Prophets. This book has health and guidance for people. Quran and the last Prophet Muhammad(PBUH) are the blessings of Allah(SWT).

Holy Quran is a complete code of life along with the sayings of the last Prophet Muhammad(PBUH).  Quran has translations available in various languages of the world so that people can understand it in their native language.

Quran Majeed is the last Holy book and there will be no Holy book after it and it is the book for all the people in the world. It also attests previous Holy Books and the Prophets.

We can say that Quran is a letter of instructions from the lord Allah towards human beings. We must try to read and understand it and concentrate on the instructions mentioned in it.